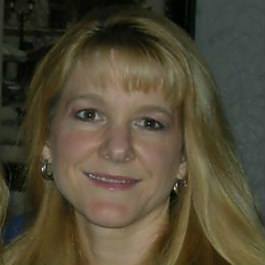 Hello my crafty friends!  I'm finally getting around to posting on my blog - for good reason, too.  Three Room Studio is hosting their first Instagram Hop on Saturday, April 25th.  If you are following along the hop, I'm sort of in the middle of the pack, after Sam- @samvandesigns.  I hope you are as blown away as I am not only on the fabulous stamps with this release, but the sheer talent in our group.  There are so many GREAT cards!!  The images are so great to color, which if you know me is sorta my jam.  My card could be viewed as a 2 for 1 deal.  The inside panel is just as nice as the outside panel and could be used for a card front by itself as well!  I didn't really intend on that when I started, it just sorta worked out that way.  Here is the front view of my card:

As you can see, this is a window card, but the window is open, no acetate.  So when you open the card it's the cute frog scene and a sentiment.

Let's dive into how I made this card.  I started out with a standard A2 folded card base in Neenah Solar White and covered it with Altenew's Washi tape in Watercolor Nebula then die cut a square window in the front, with the card in landscape position.  The 2 stamp sets I used from this TRS new release were Believe in Fairies and It's a Ponderful Life.  I knew I wanted the fairy on the outside and the frog inside the window.  I decided the fairy would be made from 40 lb. vellum.  I first fussy cut her out, then I colored her from the back side first with Copic markers, then used some Prismacolor pencils on the front.  I felt like she needed to sparkle, so I used some Ranger Stickles Glitter Gel in Nebula on her wings, which caused them to curl forward just a bit when they dried.  I actually love that 3-D dimensional look. Then I used some liquid shimmer on her dress- Shimmer Stix by Imagine, which has like double the shimmer power of Wink of Stella.  I finished her off with a white colored pencil for highlighting. 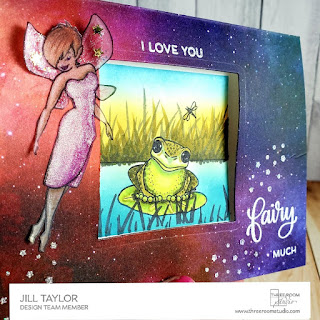 Next I created a stencil with the same square cut out of it.  I positioned it in the same place as the window, then temporarily adhered it to the inside panel.  First I stamped the frog, then masked him using Post it Notes with full adhesive.  Then I stamped the lily pad he was sitting on and masked that as well.  Then I lightly marked the water line and then did some ink blending with Distress Oxide inks for the water and sky.  I then stamped the background grass from the frog stamp set, using MFTS Hybrid ink.  I added lighter and darker tones to the grass with my Copic markers so the grass had some depth to it.  I uncovered my frog and lily pad and Copic colored them.  Next I stamped the foreground grass in a very dark grey color, again to make it feel closer to you and give the scene depth and dimension.  Finally I removed my stencil and I just loved my little scene! 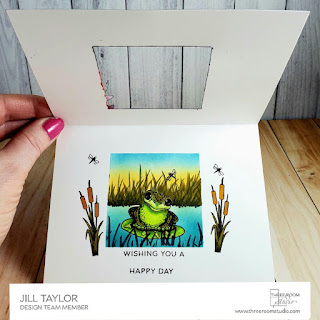 Next I went back to the front of the card, used some vellum tape to secure my fairy along the left border of the window.  Next I used my Embossing Buddy to remove any static from my card front, then stamped the sentiments in my MISTI with SSS white Pigment ink, followed by some Ranger embossing powder in Silver Pearl.  Next I stamped the star clusters in the same ink but used Ranger's Iridescent embossing powder on them, for a little sparkle!  Last, I finished off the inside panel with some cattails, small dragonflies and a sentiment (all from the 2 TRS stamp sets)..

I hope you like my card and are enjoying our IG Hop!  In fact, just hop on over to Kevin's post @kevinbray10 and see what card design he came up with.  If you like what you see, don't forget to stop by the store - Three Room Studio, I believe the stamp sets are available for purchase.  We also have a Facebook page called, Three Room Studio's Fourth Room.  There you can catch all the DT cards, the weekly challenges, and even post your own creations (we love that) or just post to IG at #trscardchallenge.

Thanks again for stopping by- be safe, be well, and happy crafting (a safe activity, yay!),